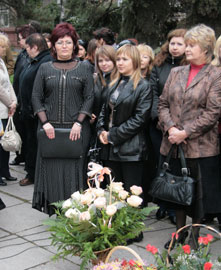 On October, 9 on the Soviet square the rally, dedicated to liberation of Zaporizhzhya from german-fashist invaders passed. To take part in the action representatives of October district administration, mass media, veterans, students and schoolchildren came.

Appeals of veterans to citizens of Zaporizhzhya to guard their motherland and to defend it were the most candid and moving. Young generation, in its turn, did not remain indifferent and expressed gratitude to veterans for everything they had done for our city. They also presented them several vivid concert numbers. At the end of the rally all the present expressed sorrow and respect for defenders of Zaporizhzhya with a minute of silence.