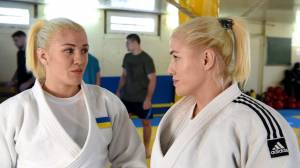 In the weight category up to 48 kg, Marina Cherniak, a student of Andrii Bondarchuk, held five fights. Gold of Marina Cherniak was the first award of the Ukrainian national team in The Hague.

As for Inna Cherniak, she confirmed the status of the strongest female judo player!  She performed a girl in the weight of 52 kg. Pupil of Andrii Bondarchuk held three fights, beating rivals from Algeria, Uzbekistan and Germany. It is worth noting that the world judo championship for athletes with visual impairments (IBSA) was held in Portugal

In the team competition, the Ukrainian team took the honorable second place, passing ahead only the representatives of Korea.

Inna and Marina congratulated friends, colleagues, judoists, relatives, and of course, mentor Honored Coach of Ukraine Andrii Bondarchuk.  By the way, Inna Cherniak has a deserved status  now and she has been awarded the honorary title of “Honored Master of Sports of Ukraine”