Ordered articles in Zaporizhzhya mass media: a view of specialists 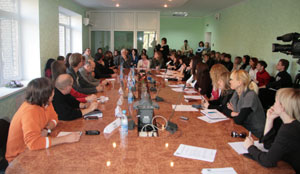 The most popular journalists of our city visited yesterday Zaporizkogo national university, in order to discuss the problem of ordered materials in mass media (so-called «jeansa»).

Students of the faculty of journalism with great interest looked at discussion of their elder associates, among them were famous Evgen Sokulsky, Bogdan Vasilenko, Olexandr Veriovkin, Evgen Solonina, Natalya Vigovska and others. Session of the round table «Jeansa» in Zaporizhzhya mass media and how to fight it” became saturated, dynamic and vivid. Journalists argued, jested, gave advice to students.