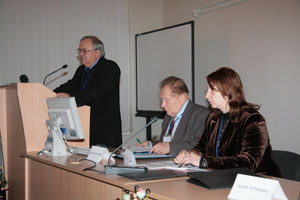 Informational and educational seminar “Role of society in realisation of Euro Atlantic integration of Ukraine” assembled well-known specialists in that problem, scientists, and public figures in different branches of social activity in the walls of ZNU yesterday. The meeting had been organized by Zaporizhzhya Centre in problems of European and Euro Atlantic integration of Ukraine with the support of Social league Ukraine – NATO of the Ministry of foreign affairs of Ukraine.

The first block of discussion became the military-political aspect. The youth was unordinary active in discussion of the military role of Ukraine as the planned member of the Alliance, inadequate PR of removing nuclear arms from the territory of our country, acquisitions on credible membership in NATO and many others.