Engineering Institute awarded diplomas with honors to the Master students 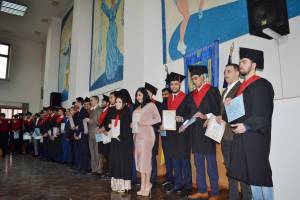 On January 31, a celebration was held in the conference hall of the ZNU as Engineering Institute was awarding the 2019 masters with diplomas and certificates for excellent study and active social life.

The holiday began with the words 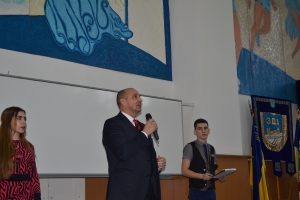 of gratitude of the graduates to their professors for their knowledge, patience and professionalism. The concert presented by the Student Art Center of Port Arte under the direction of Liudmyla Pryharo was a wonderful gift for all participants of the holiday.

While welcoming the masters, the head of the department of urban construction and economy, Viktor Banakh, as well as all other speakers, wished young people to reach new achievements, knowledge, because they are the color of the nation, Ukraine anchor its hopes on them.  Graduates were warmly and cordially welcomed by the guests of honor, noting that the representatives of technical areas are the progress of the nation, and the engineering academy provides everything for further successful career growth.

Vice-rector for scientific work Hennadii Vasylchuk congratulated the present on behalf of the rector of ZNU Mykola Frolov.  He emphasized that receiving a Master's degree with honors is a successful completion of an important life-stage.  At the same time, he invited masters to continue their studies in the graduate school of ZNU, describing the conditions of admission, the particularities of studying for those who wish to obtain a Ph.D. degree, etc.  He expressed his hope to see the best graduates of the Engineering Institute among the graduate students of ZNU in the future.

Chairman of the Association of National Minorities of the Zaporizhzhia region Naufal Khamdani noted that today is an important event as graduates of the Institute are graduating from one of the strongest universities not only in the region, but throughout Ukraine. He proudly announced that a graduate of the Fa 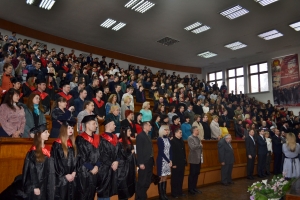 culty of Civil Engineering of the Engineering Institute has become the chief architect of Damascus (Syria)!

The host of the award ceremony, the head of the organizational and educational department of the Engineering Institute, Iryna Marti, noted in her speech that on this day the academy last time awarded the best of its best graduates with diplomas with honors and diplomas.

And then came the solemn moment. One by one, masters of excellence from all faculties of the academy rose to the scene. Joyful smiles, student robes, flying into the air, the confederates created a special solemn atmosphere.

“Vivat magisters! May good luck and success accompany you in life, and new knowledge will help to conquer the heights of a professional career,” - these words were addressed to graduates of the Engineering Institute.

Students of the Faculty of Economics and Management of the ZNU Engineering Institute are among the ten finalists of the Student Case Championship «M. Student Champ» by «Metinvest» Company
Department of Heat and Hydro Power Engineering of ZNU Engineering Institute received a unique training stand ‘Ventilated façade’
ZNU continues effective cooperation with the Senate of the Republic of Poland
Day of Knowledge in ZNU gathered first-year students of all courses and colleges
Associate Professor of the Department of Metallurgy of the Engineering Institute of ZNU Oleksandr Kharchenko is the participant of the International conference of the ESTAD-2019 in Düsseldorf
© 2018 ЗНУ Запорізький національний університет, 69600,
м. Запоріжжя, вул. Жуковського, 66,
Відділ діловодства тел./факс +38 (061) 228-75-08
Приймальна комісія тел. (061) 228-75-38 та (061) 289-12-68
Офіційна пошта