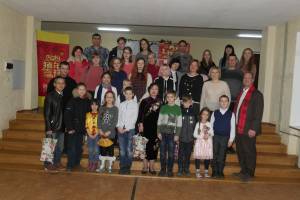 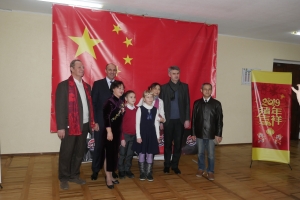 First vice-rector Oleksandr Bondar, vice-rector for scientific work Hennadii Vasylchuk, Director of the Confucius School from ZNU and from the Chinese side Volodymyr Volkov and U Shykhonh welcomed the participants of the event. All of them expressed their best wishes to the participants of the holiday and emphasized that the holidays marked together unite our peoples, allow us to get to know each other’s national traditions and culture better.  Thus, they contribute to the development of international relations of both universities Zaporizhzhia National University and Anhui Pedagogical University.

All representatives of the Chinese university such as the Director of the Confucius School U Shykhonh, and Chinese professors, Hen Lipin and Sia Yuesia were presented with New Year's gifts. In turn, U Shykhonh, Hen 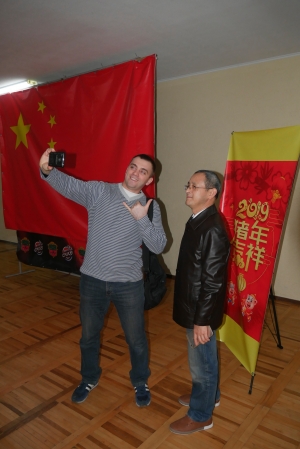 Lipin and other participants of the holiday presented the traditions of the New Year holidays in China to the present.  It is known that this year is dedicated to the yellow earthen Pig, which is considered to be cheerful, rich and even noble animal.

This year, China begins celebrating New Year on February 4-5 and the holidays continue until February 19. New Year's holiday is also called the Spring Festival, in which a variety of entertainment events take place. Families get together, in cities and towns are celebrations, their members sing, dance and have fun. Colored crackers, firecrackers, fireworks rise into the air.  Mandatory attribute of the holiday is red.

There were also other traditions of China during that celebration. In particular, those present heard the hymn of the Chinese national Republic.  During the celebration, students of the Confucius School of ZNU had the opportunity to demonstrate their achievements in learning Chinese. They sang together well-known children's Chinese songs, and also offered the audience to join the New Year's karaoke, read poems and the like.

Leaders of the holiday from the c 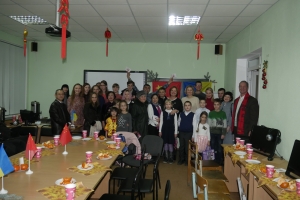 enter of culture of ZNU staged various comic competitions for the participants of the event.  And the culmination of the holiday was a gift from Confucius's professor, Sia Yuesia, a wonderful song performed in the tradition of Chinese national singing.

All interested people also had the opportunity to take pictures with the professors of the Chinese language courses. After the solemn part of the celebration, the participants were invited to the audience, where they arranged a treat for sweets and Chinese green tea.  At the same time, mandatorysymbols were present on the New Year's table among them were tw 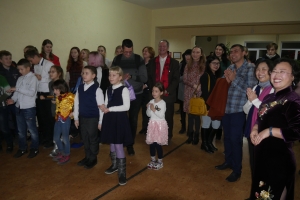 o orange mandarins, because the color and significance of this fruit for the Chinese are associated with wealth and prosperity.

And also the Director of the Confucius School Volodymyr Volkov shared with the audience the plans for the development of the activities of this unit. At the end of the school year, it is planned to carry out the first certification of students of Chinese courses with the presentation of the corresponding certificates. Work is also under way to organize a summer trip for a group of students who attended the School and have a certain level of knowledge of the Chinese language, to Anhui Pedagogical University. The February enrollment in Chinese courses is also continuing. More information about this can be found by the link: https://www.znu.edu.ua/cms/index.php?action=news/view_details&news_id=40329&lang=ukr&news_code=u-znu-ogoloshu--tsya-nabir-do-shkoli-konfutsiya

In addition, in the next academic year, the faculty of foreign philology of ZNU is planning to introduce an optional educational course in Chinese, and in 2020-2021 is going to open the specialty "Chinese language".

The office is equipping for the carrying out the International Language Exam of the level HSK at the School of Confucius at the Zaporizhia State National University
Students of Confucius School of ZNU became participants of the “Tai Chi-2019” summer sports camp
ZNU continues the development of Ukrainian-Chinese cooperation
Students of the Confucius School of ZNU took the 3rd place at the All-Ukrainian stage of the World Championship of Chinese Language Experts
Director of Confucius School Wu Shukhong spoke about Chinese culture with the students of the College of Economics and Law
© 2018 ЗНУ Запорізький національний університет, 69600,
м. Запоріжжя, вул. Жуковського, 66,
Відділ діловодства тел./факс +38 (061) 228-75-08
Приймальна комісія тел. (061) 228-75-38 та (061) 289-12-68
Офіційна пошта