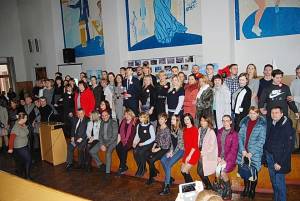 Memorial evening “At the cost of one’s own life” has been taken place in the Center of Polish language and culture by John III Sobieski of ZNU. The event was held within the framework of the grant project of the IV Forum of Young Poles of Ukraine, organized by the Center of Polish Culture and European Dialogue (Ivano-Frankivsk) under the patronage of the Society “Polish Community” (Warsaw).

This event was dedicated to the memory of martyrs and heroes of the Holocaust, Holodomor, massacres and repressions of people of different nationalities such as Ukrainians, Poles, Jews, who, risking their lives, saved each other, despite fear and threats.

Participants and students of the Center of Polish language and culture by John III Sobieski of ZNU and members of the Society of Polish Culture named by St. John Paul II spoke about the exploits of Anna Borkovska, Yan Karskyi, Yana and Antonina Zhabinska, Yakov Sukhenko. The event was also attended by talented students and members of the Youth Club of Polish Culture by Henryk Sienkiewicz in the city of Enerhodar, journalists, cultural and public figures.

Students of the Faculty of Economics and Management of the ZNU Engineering Institute are among the ten finalists of the Student Case Championship «M. Student Champ» by «Metinvest» Company
Department of Heat and Hydro Power Engineering of ZNU Engineering Institute received a unique training stand ‘Ventilated façade’
ZNU continues effective cooperation with the Senate of the Republic of Poland
Associate Professor of the Department of Metallurgy of the Engineering Institute of ZNU Oleksandr Kharchenko is the participant of the International conference of the ESTAD-2019 in Düsseldorf
Department of Management organization and Project management invites everyone to training on educational program "Public administration"
© 2018 ЗНУ Запорізький національний університет, 69600,
м. Запоріжжя, вул. Жуковського, 66,
Відділ діловодства тел./факс +38 (061) 228-75-08
Приймальна комісія тел. (061) 228-75-38 та (061) 289-12-68
Офіційна пошта