The competition of projects initiated by the rector Mykola Frolov set up the tradition of internal grants of ZNU: there are no analogues in Ukraine’s universities yet 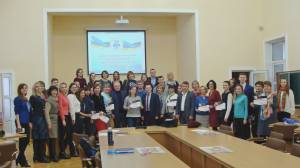 During the opening of the event dedicated to summarizing the first competition of projects to improve the image policy of the faculties, its initiator – rector of ZNU Mykola Frolov noted: “My colleagues and I have always been focused on finding new things, creative ones that make student life bright and memorable. I know that there are no analogues to our competition for projects of internal grants in universities of Ukraine. This competition is concentrated on development of our university. We have serious plans for this and the following years for the modernization of the educational process, scientific activities, and the material base.” 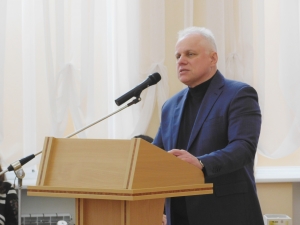 Vice-Rector for scientific and pedagogical work Yurii Kahanov who is also one of the coordinators of the competition congratulated the audience with this event.

“At the end of October last year, we announced a university-wide project competition. It took place in several stages. The task of the administration was also to provide an opportunity for training, training for the preparation, formation, and preparation of project applications. In total, 24 training sessions were held at the university”. 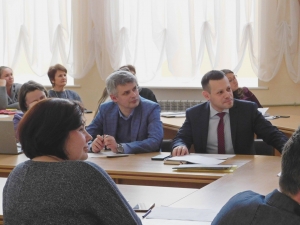 Then there were presentations of 10 projects that were allowed to participate in the 2nd round. The results of the work were evaluated by the jury members among them were rector Mykola Frolov, first vice rector Oleksandr Bondar, vice-rector Oleksandr Hura, Hennadii Vasylchuk, Yurii Kahanov, chief accountant of ZNU Oksana Aristova, director of the center of culture Yuliia Yanko, head of the student council Mariia Peresypko, head of the project activity department Olena Boika, Halyna Mykytiv, head of the pre-university training, career guidance and employment, associate professors Viktoriia Meniailo, Olena Tupakhina, Kateryna Sirinok-Dolharova.

1st place was taken by the Faculty of Mathematics. Its project “Laboratory STEM-education” received 40 thousand UAH for its implementation. They filed the following abbreviation: S - science; T - technology;  E - engineering;  M - mathematics. The goal of the project is to create seminars for professors on the bas 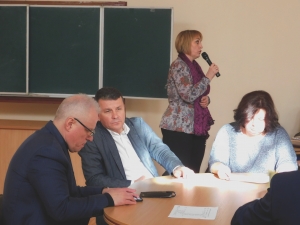 is of an educational research laboratory for conducting trainings among pupils of Zaporizhzhia schools and students of the Faculty of Mathematics.  The main material result is ten electronic designers based on the Arduino Uno platform.

The jury also decided to award two third places (20 thousand UAH for each project) to the Law and Biology faculties. Law Faculty proposed the FLAG (Forum Legal Achievement Game) competition idea. This is an image event of the faculty, from which the concept of the 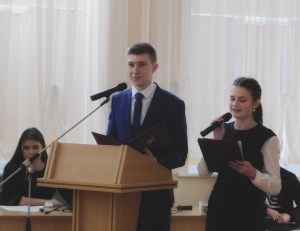 global transformation of the image policy of ZNU will begin through the effective use of the symbols of the university.

In turn, the Faculty of Biology presented the project “DNA (Oaks - descendants of the kozaks, installation)”. According to the representatives of the working group, Rylskyi Oleksandr Fedorovych - head of the department of general and applied ecology and zoology - planted acorns of Zaporizhzhia oak in his garden and is ready to provide his saplings to educational institutions in Zaporizhzhia and the region. The goal of the project is to create an external advertising composition for the faculty in order to attract the attention of residents of the city and region - potential applicants and increase interest in the specialties of ZNU.

In addition, all other designers have received not only certificates of participation in the competition, but also 10 thousand UAH. Representatives of the Faculty of Foreign Philology proposed the idea of a competition among students of grades 10-11 for the best response to a literary work in a foreign language FRESHview. 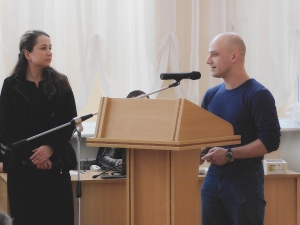 e Faculty of Social Pedagogy and Psychology proposed the project “Modernity. Professionalism. Prestige". It’s task is to increase the number of applicants to the specialties of the faculty, to promote the professional self-determination of applicants and the formation of readiness for student life.

The Faculty of Journalism prepared the presentation of the project “Mediakava - the week of intellectual volunteering in ZNU from graduates-media professionals of Ukraine”. 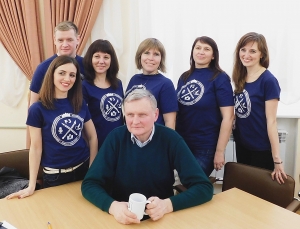 Faculty of Sociology and Administrating came to the embodiment of their plan also in a creative manner. Their project is called “The City of the Future TJM & ME_ # FSU” (T-Tesla, D-Jobs, M-Musk and I from the Faculty of Social Sciences and Public Administration).  The project provides a competition of creative works.

At the end of the event, rector Mykola Frolov thanked everyone for their contribution to such an important matter.  And also announced the opening on September 1, 2019 of 16 new multimedia audiences, which will be high-tech and modern. In addition, the rector announced the next competition of the university - the best project to attract foreign students to study at ZNU. Its results will be announced in May 2019.