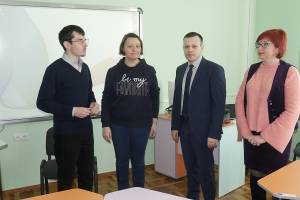 On February 19, a new multimedia audience opened at the Faculty of Foreign Philology (2 academic building, audience 326) as part of the grant project “European Values in Literary Arts”. 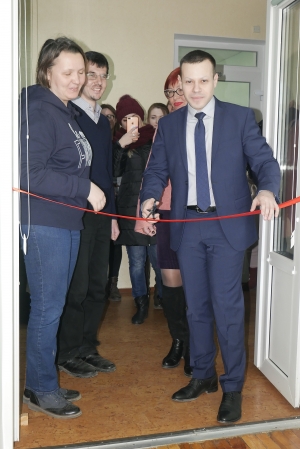 Yurii Kahanov, vice-rector for scientific work, Kateryna Vasylyna, deputy dean of the Faculty of Philology for scientific work, Olena Tupakhina, associate professor of the Department of German Philology and Translation, and Stanislav Cherkasov, associate professor of the department of World History and International Relations, as well as students of the Faculty of Foreign Philology attended the opening ceremony of the audience.

At the beginning of the event, vice-rector Yurii Kahanov congratulated all those present on behalf of the university administration and noted that the opening of each classroom with modern equipment is an important event not only for the faculty, but for the entire university.

After the ceremonial cutting of the tape, the attendees entered the audience and were able to see the new renovation, which was done in the room; also there was multimedia equipment, which allows conducting classes on the European level. Moreover, it was designed a multi-colored mobile furniture, which allows grouping participants of seminars in different ways while they perform group tasks.

The students assured that they already had the first couples in this classroom and they really enjoyed studying here.

Speaking about the program “European Values in Literary Arts 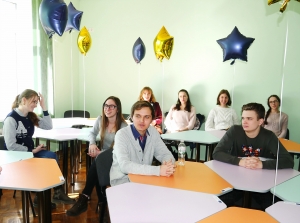 ” (European Values in Fiction), associate professor Olena Tupakhina noted that today a pilot group which consists of 20 people is studying it. The plans of the professors participating in the project are to increase the number of such groups to three next year. In just three years for which the grant project is designed, they plan to teach 350 students through this program.

Olena Volodymyrivna mentioned: “This is a generalized course designed not only for students of humanitarian faculties, but, above all, for representatives of natural specialties. We hope that, thanks to the problematics of the course, which includes the issues of the origin and development of European values, students realize that Ukrainians are members of the European community.  Program participants will not only learn how to decode artistic symbols of texts, but also feel like carriers of European consciousness. Furthermore, this is very important for modern professors”.

Participants of grant program note that not only classes for students will be held within its framework, but also round table sessions in which everyone can take part in.