A few days ago, the defense of competitive projects by graduate students of ZNU who have just completed the “European Project Culture” training course (Jean Monnet's project on European Union's ERASMUS + program) was held in Zaporizhzhia National University for the second time. 14 project groups presented interesting and useful ideas to the competent jury. Team of the jury consisted of EUROPROC project coordinator in ZNU, Viktoriia Meniailo, as well as vice-rector for scientific, pedagogical and educational work Oleksandr Hura, vice-rector for scientific and pedagogical work, Yurii Kahanov, and associate professor of the Department of Forest biology, Hunting and Ichthyology Volodymyr Sarabieiev. 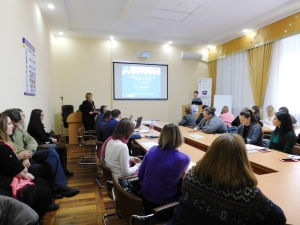 At the beginning of the event, Viktoriia Meniailo thanked all the participants with their completion of tasks and mentioned that they demonstrated a high level of preparation after the course.

Projects which were prepared by a single developer or an entire team were submitted to the jury for consideration. Some of them were sent for implementation at the university, others can be implemented at the city and regional level, or even all over Ukraine.

Several of these projects have already been successfully developed and can be accomplished at the level of rural communities. Some of the graduate students are only planning to submit a project to competitions that are funded by the city, regional budget, national or international grants and programs. By the way, it was the advice that designers received from representatives of the jury.  This may be the competitions “We are a cityxz” (from PJSC “Zaporizhstal”) in particular or the international project “Active citizens” (program o 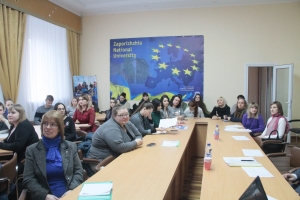 f the British Council), which have gained popularity among citizens and professors of ZNU.

The authors of the developments defined the project objectives, relevance, as well as the possibilities of its promotion, and sources of funding during the presentation. They created and presented many interesting and wholesome ideas. Serhii Shadov, professor of ZNTU, offered a practical “STM Microcontrollers Programming Course”. Also, a graduate student of the Faculty of Mathematics Oksana Choporova, together with a representative of the Faculty of History of ZNU, Daria Kostiuk presented a project of creating a mobile application and a website called “History and computer application”, which can be useful while studying the history of the native land. School teac 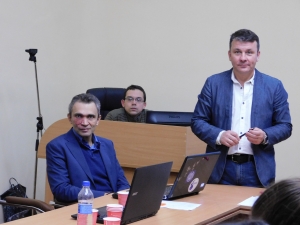 her Tetiana Peretiatko plans to create a thematic circle "Young vocabulary" for students of 9-11 grades.  Valeriia Diachkova presented a project for creating the “House of Happiness”, which will be concentrated on preventing the outflow of young people from the village.

Each of the projects was publicly discussed by jury members and participants during the meeting. They also put some questions to the authors of the projects, pointed out the shortcomings and advised what they need to improve. 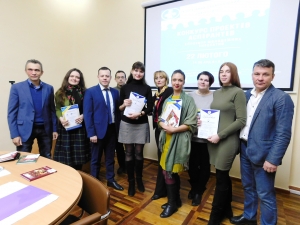 The winners of the competition were awarded certificates of honor, and all participants of the event received certificates confirming passing the course “Fundamentals of European Project Culture” (Jean Monnet's module on the Erasmus+ program).

At the end of the meeting, the members of the jury thanked the participants for their responsible attitude towards their projects, as well as for interesting ideas and suggestions. Some of them are going to be implemented at ZNU.

ZNU reported on the implementation of the MultiEd project during National Erasmus+ Office preventive monitoring
The scientific library - for freshmen
The project of students of ZNU is a participant of the program “Public Budget” and needs your support
Students of ZNU Kyrylo Pyrohov and Kostiantyn Reva are silver medalists in the international weightlifting championship «Cup of blue swords»
Take the opportunity to become a student this year! ZNU conducts additional set for all educational levels and specialties
© 2018 ЗНУ Запорізький національний університет, 69600,
м. Запоріжжя, вул. Жуковського, 66,
Відділ діловодства тел./факс +38 (061) 228-75-08
Приймальна комісія тел. (061) 228-75-38 та (061) 289-12-68
Офіційна пошта