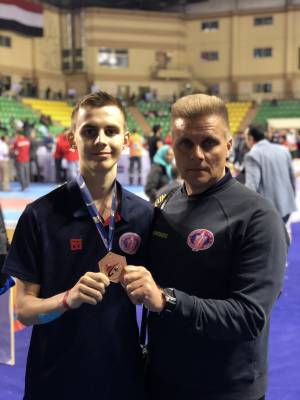 It is worth noting that more than 1000 athletes from all over the world fought for the championship. Taras had three fights and received a bronze award. He won two representatives of Egypt, but lost to the champion in the tournament in an extra round.

He expressed sincere gratitude for the support of professors of the Law Faculty, and especially to the dean Tetiana Kolomoiets. Moreover, the student of ZNU has a large number of victories on his account. He started his sporting career from 8 years old and received many awards, for example, 3rd place in the Junior Championship, 3rd place in the European Youth Championship. He is also a master of international class sports, a multiple winner and winner of international tournaments and championships in Ukraine.

In the framework of the cooperation agreement between ZNU and Association of women-lawyers of Ukraine «Law firm», students of the Faculty of Law participated in webinar
Students of ZNU Kyrylo Pyrohov and Kostiantyn Reva are silver medalists in the international weightlifting championship «Cup of blue swords»
ZNU graduate Serhii Popov is the winner of the Beach Volleyball Cup of Ukraine
A graduate of ZNU Sergey Frolov is among the participants of the 18th FINA World Championships
Master student of ZNU Liudmyla Babak is European champion in rowing and canoeing
© 2018 ЗНУ Запорізький національний університет, 69600,
м. Запоріжжя, вул. Жуковського, 66,
Відділ діловодства тел./факс +38 (061) 228-75-08
Приймальна комісія тел. (061) 228-75-38 та (061) 289-12-68
Офіційна пошта