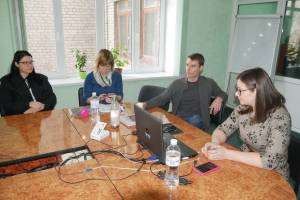 On March 21, a round table conference was held at the Faculty of Journalism with the participation of American photojournalist Brendan Hoffman. The event was held in the framework of the opening of the photo exhibition “Brotherland: war in Ukraine” in ZNU. Honorary guest of ZNU, American journalist and scholar of the U.S. Fulbright program Rene Hickman joined the event to discuss current social issues, the image of Ukraine in the world, standards of journalism, etc.

Zaporizhzhia National University during the event was represented by the Dean of the Faculty of Journalism Viktor Kostiuk, professors and students of the faculty. The conference was also attended by representatives of local media and by everyone who was interested in the chosen topic for discussion. The meeting was coordinated and interpreted by the PhD Associate Professor, Vice Dean in International Affairs of the Faculty of Journalism, Kateryna Sirinok-Dolharova.

At the beginning of the meeting, she noted that Brendan Hoffman is a documentary photographer who lives in Kiev now. His attention is focused on Ukraine during the last years. He still continues to cover the war in eastern Ukraine.  In 2018-2019, he will develop a new section of the project about Ukraine as a Fulbr 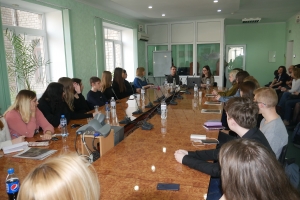 Brendan Hoffman spoke about his desire to show the world the events that are taking place in territories beyond the control of Ukraine. In particular, the photographer emphasized that he often perceives his work as material for future historians, criminologists, important evidence for relatives of people in a zone of military conflict, etc. That is why he tries to remain impassive while recording events.

The photographer noted that today many people in the United States consider Ukraine as a strategic partner. The events of recent years, with all the tragedy made people from other countries to pay more attention to our nation and they also got desire to learn more about it.

Brendan Hoffman and Rene Hickman noted that Ukraine has tourism potential; for example their friends were impressed after visiting Ukraine in the recent years.

Moreover, they answered numerous questions from participants of the conference.

At the end of the event, Viktor Kostiuk thanked the speakers and participants of the meeting, and also invited everyone to attend a photojournalism workshop which will be held by Brendan Hoffman.