On March 26, the International Education Forum "Ukraine - Bulgaria" was held in the Engineering Institute of ZNU.

The event was opened with dance compositions of guests - talented dancers of the folk ensemble “Zaporozki charodiitsi”.

Opening the Forum, Doctor of Technical, Professor Viktor Banakh noted that the Bulgarian people have always been friendly to Ukraine and the Ukrainian people, and the holding of this Forum was another evidence of trust between our countries. Director of the Engineering Institute of ZNU Hennadii Kolomoiets paid a lot of attention to cooperation between Engineering Institute and “Tural” company. He stressed that the programs offered by the firm expand the students' outlook and expressed the hope that today's meeting will become a new step for the further development of Ukrainian-Bulgarian educational initiatives.

The host Vitalina Mykytenko read a greeting from the head of the trade and economic affairs service of the Embassy of the Republic of Bulgaria in Ukraine Stefan Sofroniiev. He noted that Ukraine occupies a particularly important place in foreign policy, foreign economic and cultural terms for Bulgaria, and education is the second area in which there is an additional intensification of bilateral relations.

Vasyl Mitkov, chairman of the Zaporizhzhia Regional Society of Bulga 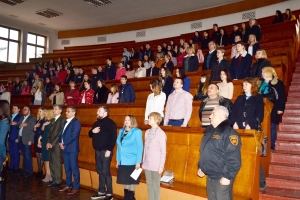 rian Culture, congratulated the present on behalf of the Honorary Consul of the Republic of Bulgaria Serhii Zheliev. Vasyl Mitkov presented his book “The Bulgarians on Zaporizhzhia Land: Pages of History and Culture” to the administration of the Institute.

During the Forum, presentations were made by the President of the Zaporizhzhia Association of Ethnic Minorities Naufal Khamdani, Ph.D., Professor, Academician of the Ukrainian Academy of Political Sciences Valentyna Voronkova, Deputy Director for educational work of Zaporizhzhia Humanitarian College Nadiia Takhtadzhyieva and others. The participants of the Forum listened with great interest to the creative director of the Museum of Arms History, a famous Zaporizhzhia local historian Roman Akbash. His report was devoted to the history and formation of the education system in the Zaporizhzhia region since ancient times.

Concluding the work of the Forum, the General Director of the “Tural” company (Bulgaria), the founder of the International Creative Festival-Competition “Slavic Crown” Hesho Liubenov spoke about the activities of the “Tural” company in Ukraine. He stressed that the first office of the company was opened in Zaporizhzhia. The speaker also expressed confidence that the further cooperation of all participants of the Ukraine-Bulgaria Forum will become a new stage in the spread of Ukrainian-Bulgarian friendship.

Students of the Faculty of Economics and Management of the ZNU Engineering Institute are among the ten finalists of the Student Case Championship «M. Student Champ» by «Metinvest» Company
Department of Heat and Hydro Power Engineering of ZNU Engineering Institute received a unique training stand ‘Ventilated façade’
Team of the Project ERASMUS+ KA2 DESTIN are trained in updating the study programs in journalism
ZNU continues effective cooperation with the Senate of the Republic of Poland
Associate Professor of the Department of Metallurgy of the Engineering Institute of ZNU Oleksandr Kharchenko is the participant of the International conference of the ESTAD-2019 in Düsseldorf
© 2018 ЗНУ Запорізький національний університет, 69600,
м. Запоріжжя, вул. Жуковського, 66,
Відділ діловодства тел./факс +38 (061) 228-75-08
Приймальна комісія тел. (061) 228-75-38 та (061) 289-12-68
Офіційна пошта