Scientists of ZNU have led the conference, devoted to the epochal document in the history of mankind

There are a lot of significant dates at the beginning of December. On December, 10th all over the world they celebrated the 60th anniversary of acceptance the General declaration of Human Rights. To this date the Faculty of Law of our university has led scientific and practical conference. 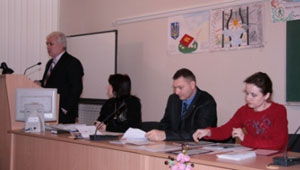 The head of the university, Professor Sergy Timchenko in the reference to participants of the conference has noted the uniqueness of this epochal document which was included into the book of Guinness’ records quantitatively of languages it has been translated into. There was Ukrainian academician Vladimir Koretsky among developers of the General declaration of Human Rights. It was him to write the first clause. The Dean of the Faculty of Law, Professor Tetyana Kolomoets’, addressing to gathered, has noted national scale of celebrating. Also she has named all organizers of the action, the main from which was the Faculty of Law. 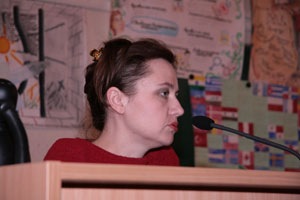 Iryna Mykhaylyk, the representative of the Central administrative board of justice in the Zaporizhzhya region has visited the conference. She has informed that now there is the special page, devoted to this document on the site of the Ministry of Justice. During plenary session authors of the best wall newspapers, devoted to human rights, winners of university competition of scientific works in nominations “History” and “Law” were rewarded. By results of sections’ work participants of the conference have accepted the resolution.

Except the conference students of the second and third years of the Faculty of Law took part in the brain-ring. The winner became the team “Yurbot” that has got maximum quantity of points. All participants of the competition have received books which will help them to improve knowledge in the subject.