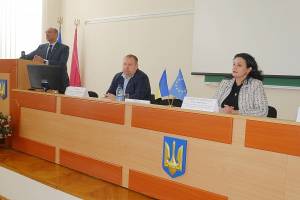 On April 8, Vice Prime Minister of Ukraine for European and Euro-Atlantic Integration, Klympush-Tsintsadze Ivanna visited Zaporizhzhia National University. The guest met with rector of ZNU Mykola Frolov and with vice-rector for scientific work Hennadii Vasylchuk. Representatives of the university administration discussed with an honorary guest issues of integration of ZNU into the European educational space, including the participation of professors and students of ZNU in international grant programs, as well as prospects for the further development of its international activities. In addition, the Vice Prime Minister met with students and professors of the Faculty of Sociology and Administrating, Management, History, Law, and with the representatives of the College of Economics and Law. 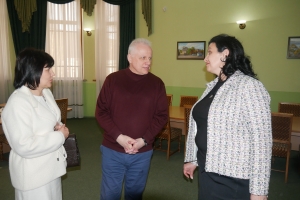 At the beginning of the event, Hennadii Vasylchuk introduced an honorary guest to the audience and noted that ZNU is an open space for thoughts, meetings, and communication. Here you have an opportunity to speak with famous politicians, officials, scientists, etc., so that students are able to ask them different questions and find out new information. Klympush-Tsintsadze Ivanna also congratulated the present, and suggested the format of the dialogue for the meeting: after her brief speech, everyone could ask questions and get comprehensive answers to them.

In her speech, Ivanna Orestivna asked the present to recall that long and challenging way that Ukraine had come during the last five years. She mentioned that on February 27, 2014 the national treasury had only 108 133 UAH and the country was predicted of default. But as a result, there is a stable growth of the economy 13 quarters in a row.  The process of restoring the Ukrainian army began, and today it is among the ten best armies in Europe. The experience of confronting Russian aggression in a hybrid war interested NATO.

The speaker agreed that today the 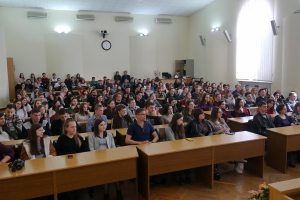 country requires major changes, but now the nation continues a gradual reform.  European integration, in her opinion, is an opportunity for Ukraine to return to the family of European countries. But for this you need to go through a difficult path, and both the government and the society should bear responsibility.

The guest approvingly responded about the participation of ZNU in a number of international academic programs, in particular “Erasmus +”, and encouraged students to use all the opportunities that are open to them, owing to the integration into the European educational space.

When one guest asked Vice-rector Hennadii Vasylchuk which second foreign language, after English, young people should study today, he advised to pay attention to Chinese. Hennadii Mykolaiovych reminded that there is Confucius School in ZNU, where everyone can master the Chinese and learn more about the culture of this country.

In addition, the speaker assured that students of ZNU will be able to do practical work on the basis of the ministries of Ukraine.