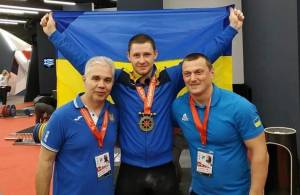 In the city of Batumi, during the European championship in weightlifting among men and women, two athletes from Zaporizhzhia defended the honor of Ukraine. Among them is a student of Zaporizhzhia National University, the winner of numerous prestigious sports competitions, Kyrylo Pyrohov. He managed to get the "small bronze" of the European Championship in snatch, showing a result of 171 kg.

In addition, during the championship the athlete of ZNU also set a record for Europe among youth under 23 years old.  By the way, in the sum of biathlon he became the fifth. And this is despite the fact that it was his first time at the adult European Championship.

His sporting achievement has particular importance, since Zaporizhzhia heavyweights were standing on the pedestal of the adult European Championship only in 2002.

The team of Zaporizhzhia National University congratulates Kyrylo Pyrohov and Honored Trainer of Ukraine, professor of the Department of Physical Education Anatolii Orlov and is proud of his sporting achievements and wishes them further sporting success!