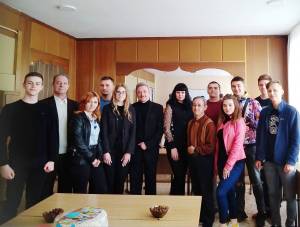 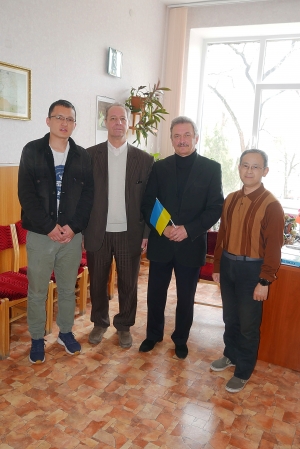 The event was held with the participation of representatives of the college, leaders and professors of the Confucius School. Participants of the event were greeted by the Director of Trade College Oleksandr Oliinyk, the director of the Confucius School from ZNU and from the Chinese side - Volodymyr Volkov and U Shykhonh and the volunteer of Confucius School Takhtabek. They stressed that such events unite our people, allow them to better understand the national traditions and culture of each other. Thus, they contribute to the development of international relations of both universities - Zaporizhzhia National University and Anhui Pedagogical University, whose representatives today teach at Confucius School. So, Volodymyr Volkov noted that within the framework of the development project of the Confucius School it is planned to create an educational center on the basis of Trade College for teaching Chinese language and acquaintance with Chinese culture.

There was also prepared a lecture and an informative quiz about Chinese culture. The main objective of these events is to familiarize Ukrainian youth with Chinese philosophy, art, language, culture, and to establish intercultural dialogue.

During the quiz “China: Culture and Traditions”, participants of two student 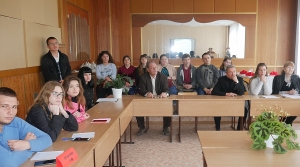 teams (“Yin-Yang” and “Dragons”) had the opportunity to get acquainted with China’s traditional and contemporary art, the mentality of its inhabitants, cultural heritage, and philosophy.

According to the results of the contest, the “Dragons” team won, which scored 26 points; the second was the “Yin-Yang” team with 13 points. All participants received certificates of participants and winners. According to the administration of the college, such joint activities will continue in the future. For example, workshop on cooking Chinese national dishes is planned for the college open door day. At the end of cultural events a joint photo session awaited the participants.

The office is equipping for the carrying out the International Language Exam of the level HSK at the School of Confucius at the Zaporizhia State National University
Students of Confucius School of ZNU became participants of the “Tai Chi-2019” summer sports camp
College of Commerce of ZNU received more than 100 applications on the basis of 9 classes
ZNU continues the development of Ukrainian-Chinese cooperation
Students of the Confucius School of ZNU took the 3rd place at the All-Ukrainian stage of the World Championship of Chinese Language Experts
© 2018 ЗНУ Запорізький національний університет, 69600,
м. Запоріжжя, вул. Жуковського, 66,
Відділ діловодства тел./факс +38 (061) 228-75-08
Приймальна комісія тел. (061) 228-75-38 та (061) 289-12-68
Офіційна пошта