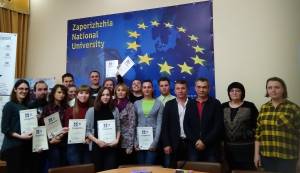 On April 15, Zaporizhzhia National University hosted the final stage of the competition of projects of Master’s students "Epicenter of youth initiatives" based on the results of Jean Monnet European Project Culture module, which is taught at ZNU as part of an international project on the Erasmus + program. 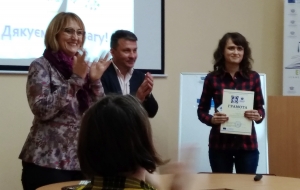 It should be remembered that the main purpose of this competition is the preservation and development of the intellectual potential of the region, in particular the disclosure of the innovative potential of students for the socio-economic development of Zaporizhzhia region.

Master’s students of Zaporizhzhia National University during the defense of the projects submitted for the consideration of a highly qualified jury the results of their creative activity, which lasted during the second semester of this year.  Their projects dealt with such t 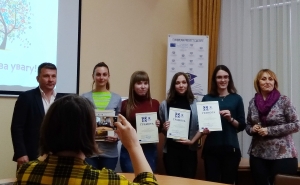 opical issues as the further development of Zaporizhzhia National University, environmental management, ecology and transport communication of the city, school education, health care and volunteering.  In their speeches, the designers described the goals, objectives, relevance, deadlines, equipment and materials, project budgets, schedules for their implementation, analyzed the risks and opportunities for generating profits. The project coordinator Viktoriia Meniailo congratulated the participants of the project on behalf of the EUROPROC project group.

The students of the magistracy Danchych Yuliia, Dikhtiar Kateryna, Kaluhin Yevhen, Dmytro Tonkonoh were the first who presented their work. They presented the project "Green City", which provides Alexander Garden beautification and the dividing line in Hoholia Street. Graduate student Anastasiia Korsun proposed to the jury a project to organize a charity concert in support of cancer patients “Everyone has a heart” to raise funds for the treatment and rehabilitation of patients of Zaporizhzhia Regional Clinical 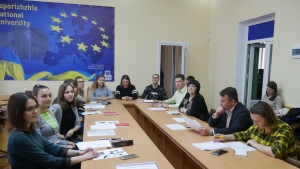 Oncology Dispensary. The graduate student Yan Tsvirko told about the project "Sturgeon Farm". Further, the project “Route number 666” was presented by graduate students Anatolii Artemenko and Anastasiia Pimorenko and this project provides with the solution of the transport problems of the city. This route, 28 km long, according to the students, is supposed to connect Khortytskyi and Zavodskyi districts through Dniprovskyi district. The educational project “SPECTRUM” was presented by graduate students Iryna Hus and Anna Shcheka, which provides increases the level of knowledge of mathematics among school students, and the development of their logical thinking.

As a result, by decision of the jury, the places among the contest participants were distributed in the following way: the 3rd place was given to the authors of the projects “Sturgeon Farm”, “Route nomber 666”, “Green City”, 2nd place to the performers of the project “Everyone has a heart”, and 1st place got the developers of the project "SPECTRUM".

The winners and participants were awarded with certificates, valuable gifts and certificates that confirm the acquisition of knowledge in the course "European Project Culture".