The All-Ukrainian festival of games, learning and inspiration took place on April 20 in the sports complex of Zaporizhzhia National University. Its goal was the development of creative, architectural, design skills and communication skills of children through team work on a joint project. The main task that was set by the organizers was to uncover the theme by building a model from the LEGO designer and presenting the project directly at the festival. 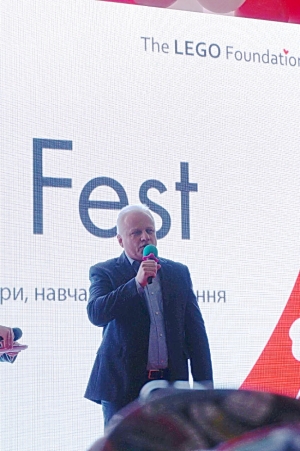 This year the theme of the competition was “Professions of the Future”.  The participants of the event were to create a model that would reflect the essence of the profession and the possibilities of its implementation. The festival was held with the assistance of the LEGO Foundation and the head of the Lego Foundation's educational projects in Ukraine, Oksana Roma. The coordinator of the festival from Zaporizhzhia National University was Oleksandr Hura, Vice-Rector for Scientific, Pedagogical and Educational Work. Owing to the initiative of Oleksandr Ivanovych and with the full support of the rector Mykola Frolov, the project of The LEGO Foundation was founded on the basis of the university.

During the grand opening of the event, Tetiana Ozerova, Director of the Department of Education and Science of the Zaporizhzhia Regional State Administration, Mykola Frolov, Rector of Zaporizhzhia National University, Oleksandr Bondar, first Vice-Rector, Oleksandr Hura, Vice-Rector for Scientific, Pedagogical and International Affairs, Tetiana Hura, Vice-Rector for Scientific and International Affairs of Zaporizhzhia Regional Institute of Postgraduate Pedagogical Education, Olha Ponomarenko, Dean of the Faculty of Social Pedagogy and Psychology and others had a welcoming speech.

During the opening ceremony of the event, rector Mykola Frolov noted the importance of organizing and holding such festivals for training the future generation of highly professional specialists. He also mentioned that representatives of ZNU are proud to have been able to join in the holding of such an important event and that they are always open for the implementation of new educational projects intended for all age groups of citizens of our state. 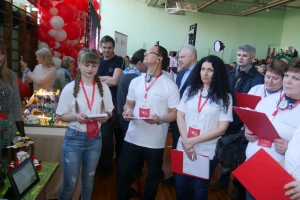 constantly implement projects aimed at strengthening and developing relations with institutions of secondary education in ZNU.  Therefore, this festival can be the next step for the development of the industry of education in Zaporizhzhia region.  Oleksandr Hura, Vice-Rector for Scientific and Pedagogical Work, emphasized that the great importance in the university is attached to the introduction of innovative technologies in the educational process and acquaintance with the latest teaching methods for students who have chosen pedagogical specialties for themselves. That is why the cooperation of the university and the LEGO Foundation is of particular importance.

The Dean of the Faculty of Socia

l Pedagogy and Psychology Olha Ponomarenko mentioned the relevance of the theme of the competition, which was held during the festival. She thanked the organizers and participants of the festival for non-indifference and activity, the desire to develop the industry of education and develop themselves.

During the festival were held: Mel-fest, workshops in game training techniques, entertainment-journey into the world of professions, play-session with works, family workshops from the LEGO Foundation trainers, fun “Chemist Show”.  And, of course, there was an exhibition-competition which was held as part of the Festival. Among the participants were students of schools and students of preschool educational institutions who also presented their own projects.

Moreover, students of ZNU helped as volunteers. Oksana Roma noted that students became volunteers for the first time in all the years of such festivals.

At the end of the event the participants of the competition were congratulated and awarded with valuable gifts.

ZNU reported on the implementation of the MultiEd project during National Erasmus+ Office preventive monitoring
INTERNATIONAL DISTANT MEETING ON THE COVID-19 PANDEMIC
“Summer School of Young Journalists” successfully completed its work in ZNU
The results of the implementation of the international project EUROPROC in ZNU were presented in the National Academy of Educational Sciences of Ukraine
The results of international project EUROPROC: the second year of implementation were summed up at ZNU
© 2018 ЗНУ Запорізький національний університет, 69600,
м. Запоріжжя, вул. Жуковського, 66,
Відділ діловодства тел./факс +38 (061) 228-75-08
Приймальна комісія тел. (061) 228-75-38 та (061) 289-12-68
Офіційна пошта