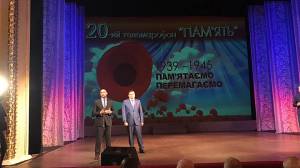 This year, the annual TV marathon “Memory” dedicated to the feat of the Ukrainian people in World War II is held for the twentieth time in Zaporizhzhia. This event has no analogues in Ukraine. During an important social and public action, indifferent residents of the city and region raise funds to support veterans, military personnel and their families. Zaporizhzhia National University does not remain aloof from this public initiative. The team of university annually actively joins the support of Ukrainian soldiers.

The final stage of the marathon was held on May 7 at Zaporizhzhia Musical and Drama Theatre named after Magara where officials, representatives of public organizations and higher educational institutions had speeches in front of the participants of the event. Vice-rector for scientific work of ZNU, Hennadii Vasylchuk, both as a deputy of Zaporizhzhia City Council and as a representative of the leading institution of higher education, in his greeting noted that veterans and former military personnel can also rely on ZNU and Zaporizhzhia City Council if they need any help.