Christmas performance took place at the Faculty of Foreign Philology 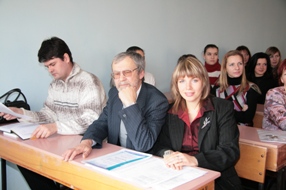 On December, 19th at the Faculty of Foreign Philology the Christmas dramatized show took place. It has been prepared by the fourth year students of English department. Such New Year’s performances already became a tradition at the Faculty.

Annually on the eve of winter exams students sum up the study of four and a half term and create witty, cheerful scripts, which they embody on the stage. On the one hand, it is fastening of skills which will have the positive results during exams; on the other hand it is great career-guidance work because usually for such actions graduates of town’s schools are invited. This year pupils of Zaporizhzhya schools №№ 93, 31, 52 and 23 have been invited for the holiday. Pupils, students and teachers, excitedly observed the New Year’s adventures of fantastic and real characters. The majority of graduates which were present on the holiday have already made a decision to enter the Faculty of Foreign Philology.