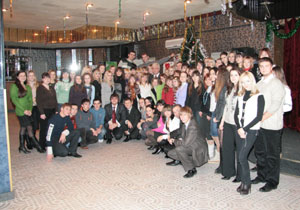 Action in such original format at our university is spent for the first time. But organizers: student’s board, the department of educational work and student’s culture centre, trade-union committee, - are sure that it will become a good tradition. As for this “test” it was on December, 23rd in the disco-club “Tatyana’s day”.

It is necessary to note, that the main aim of the action was not only to congratulate the best students of ZNU on coming holidays, but also to give them an opportunity to communicate to the Rector in informal conditions. The initiative of carrying out such action belongs to Sergiy Tymchenko.

Inna Derevynska, the chairman of student’s board has congratulated students of our university and has addressed to the Rector. She has thanked him for constant support and has transferred symbolical “magic wand” which should carry out all desires.

Sergiy Mikhajlovych, in turn, has emphasized, that it is extremely pleasant to him to congratulate the excellent students on coming holidays and that he always receives moral pleasure from communication with students.

Ilona Andriyeva, the chairman of student’s board of the Faculty SPP has addressed to the Rector on behalf of all students.

It is necessary to note, that the joyful atmosphere of the action was also provided with the concert numbers prepared by the best actors of our university. All present were pleased with the remarkable songs of Anna Nosenko and Suren Markaryan. Extraordinary grace was shown by dancers of group “Grace” Katerina Shchurenko, Marina Denysenko and Andry Krupkin.

Zest of the action was collective photo for memory after which the Rector has expressed desire to be photographed with each excellent student separately. Such photo session became one more pleasant gift for students. Students were so inspired by communication with the Rector, that after photographing they have decided to take his autograph which he left on ZNU anniversary book.

Action was finished by a cheerful disco and competitions.