New Year’s fairy tale for ZNU members and their children 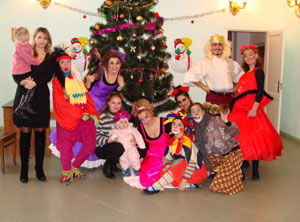 This year by good tradition trade-union committee of ZNU pleased all members with the numerous gifts and surprises. Children of our teachers, employees, students, post-graduate students were lucky most of all. Each of them has received a sweet gift “Christmas”, tickets for the New Year’s tree party to culture center “Dniprospetsstal”, tickets for cartoon film “Christmas fairy tale Anabel” to the cinema “Dovzhenko”. Special surprise was an opportunity to visit New Year’s show “the Water enchanting spectacle” in Zaporizhzhya circus.

Thanks to efforts of administration of our university, trade-union committee and the Faculty of Social Pedagogics and Psychology, children had an opportunity to visit a remarkable holiday of the New Year’s tree which has passed on December, 25th in the cultural center “Drobyazko”. It was real fairy tale. Students of actor’s department have played the Father Frost, the Snow Maiden, the Snowflake, Baba-Yaga, buffoons and other wonderful heroes. After show kids had a good time, being photographed with the Father Frost and other actors, sang songs and danced in a ring around New Year’s tree.

But especial admiration was caused with theatrical performance “Troubadour and his friends” played by the third and fourth years students of theatrical department of the Faculty SPP.

Trade-union committee has arranged one more pleasant surprise for our employees: they have organized a cultural campaign for all wishers to the cinema “Dovzhenko” for films “Love-carrots 2” and “Manned Island”.