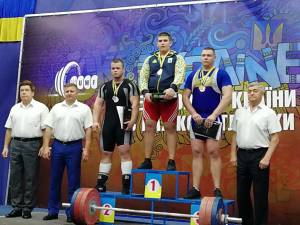 Now, as a result, Zaporizhzhia athletes won five gold medals at the Ukrainian Weightlifting Championships. Therefore, the team of the Zaporizhzhia region brilliantly performed at the Weightlifting Championship of Ukraine among youth under 23 years old, which took place recently in Chornomorsk. Two more medals of the highest esteem were added by ZNU students Anton Serdiukov, who became the champion of Ukraine in the weight category of 89 kg, and Oleksandr Serheiev - gold in the weight category +109 kg.

It should be remembered that student Anton Serdiukov during last year's Championship of Ukraine in weightlifting also got gold (85 kg category).

Oleksandr Serheiev this year in Kolomyia won a bronze medal in the junior weightlifting championship of Ukraine at the age of 20. In addition, in the city of Berehovo, Zakarpattia region, at the Ukrainian weightlifting championship among juniors under 20, Oleksandr Serheiev won the silver medal in the weight category of 105 kg with a score of 307 kg.

It is worth noting that Anatolii Orlov, the professor of the Physical Education Department, became the constant inspirer and coordinator of the work of our weightlifters.