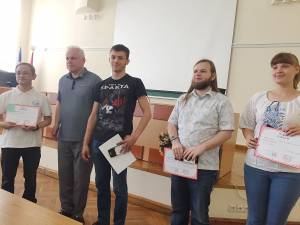 The Confucius School has been functioning for the second year at Zaporizhzhia National University. The work of this structural unit was fully approved by colleagues from the Anhui Pedagogical University (Wuhu, Anhui Province, China). The educational services offered by professors of the Confucius School such as native Chinese speakers with teaching experience for foreigners are very popular among the residents of Zaporizhzhia and among students of ZNU. 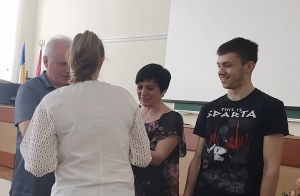 Their high quality of teaching is convincingly shown by the first serious victory of the students of the Confucius School. Its team took 3rd place in the All-Ukrainian stage of the World Championship of Chinese Language Experts, organized by representatives of the headquarters of Confucius Institutes with the support of the Embassy of the People's Republic of China in Ukraine.

They were students of the Physical Education Department Alina Kriuk, who has been studying Chinese for 1 year, and Heorhii Zhyvotok, who has been attending language course 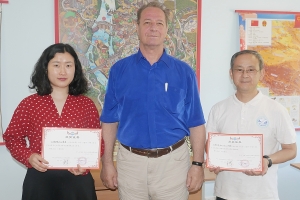 s for only 3 months, and Volodymyr Sereda, a former student of the Mathematics Department, who studies 1.5 years at the Confucius School and is now improving his level of proficiency in a foreign language to continue studying in China.

The director of the school from the Chinese side U Shihun and the director of the Confucius School from the Ukrainian side Volodymyr Volkov paid a lot of attention to the development of a team performance strategy. In particular, when preparing the creative number of the team, they offered to pay attention to the sports component of the performance, after all, Heorhii Zhyvotok has been engaged in wushu for 16 years. In particular, he recently received a silver and two bronze medals at the European Championship in this sport, which was held in Greece. This allowed the athlete to conduct a demonstration performance at a professional level.

After the grand opening of the competition, the first stage of the competition began: a collective performance with speeches. This year, the championship was held under the motto: “The whole world is one family,” pre-prepared speeches of all team members were devoted to this topic. The next competition demonstrated the ability to improvise.  Each participant had to choose one of 40 questions related to the culture of China, and after a minute of training, they had to speak on the subject within a minute. Further, from the four options proposed, it was necessary to choose the correct answer by inserting the missing words into the proposed sentences. 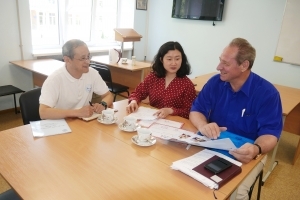 All the teams coped brilliantly with the concert numbers: students from different universities showed a mini-show, dance and vocal numbers. Alina Kriuk and Volodymyr Sereda sang the wushu anthem, while Heorhii Zhyvotok made a demonstration performance. As a result, the jury awarded our representatives an honorable 3rd place. All team members received prizes and diplomas. The team of professors at the Confucius School received diplomas for high-quality work and organizational training. In addition, Sia Siuiesia was also awarded an honorary diploma.

After the victorious return to ZNU, rector Mykola Frolov congratulated the representatives of the team and the director of this school on behalf of U Shihun and the director of the Confucius School from the Ukrainian side Volodymyr Volkov. Mykola Oleksandrovych expressed the hope that in the future new weighty achievements will await the listeners. He also assured that the administration of HEI will continue to provide full support to representatives of the Confucius School.

Solemn presentation of certificates of the School to its students will be held on May 31 at 5.30pm in the Academic Building 1, aud.  50.

We remind you that you can register for language courses by link: https://bitly.su/Qvq4