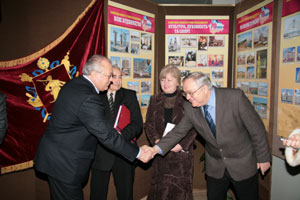 The management and the teacher’s stuff of our high school have acted as co-organizers of the International scientifical and practical conference, devoted to prospects and priorities of development of our region. Representatives of ZNU have also taken part in other official actions devoted to this date.

The pro-rector, Professor Fedir Turchenko has taken part in presentation of the unique project - book “Zaporizhzhya land”. The book allows readers to receive the most trustworthy information in history of towns and districts of the region. Representatives of ZNU have also visited ceremonial opening of photo-exhibition “Zaporizhzhya region: yesterday, today, tomorrow” at Zaporizhzhya museum of local lore, where the photos of Vasyl Bychenko, press photographer of ZNU, were presented.

Among other actions, devoted to anniversary of the region, release of the book under the working name “Outstanding people of Zaporizhzhya” is planned. Our scientists are in group of authors of this edition.