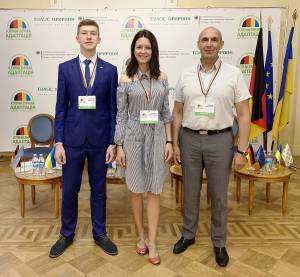 Two-day Ukrainian-German conference "Climate Adaptation: Challenges and Prospects at the National, Regional and Local Levels" began its work on June 6 in Dnipro city. The event was held with the support of the Consulate General of the Federal Republic of Germany in Donetsk (office in Dnipro) and the environmental organization “The Voice of Nature”. 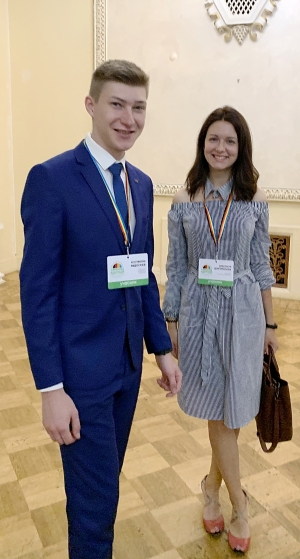 This scientific meeting brought together scientists, representatives of public organizations, representatives of higher educational institutions who are interested in current environmental and social issues.  Zaporizhzhia National University also took part in this event. The University was represented at the event by the Vice-Rector for scientific work, Professor Hennadii Vasylchuk, as well as the staff of the university energy efficiency and energy saving laboratory Kostiantyn Fedosieiev and Anastasiia Dolhopolova.

During the opening ceremony of the conference, the participants were congratulated by the Consul General of the Federal Republic of Germany in Donetsk (office in Dnipro), Dr. Volfgang Mossinger, as well as representatives of the governing bodies of the city and region. They noted the relevance and importance of the topic chosen for consideration by the conference participants.

During the opening of the conference, Yohannes Baur, Head of the Assistance Program Section “Economic Cooperation, Energy, Infrastructure and Environment” (EU Delegation in Ukraine) “Challenges for the EU and Ukraine in implementing climate policy” was heard.

Further, the work of the conference participants continued in the sections “Current climate and trends of climate change in Ukraine and in Germany” and “Displaying climate adaptation in policies at different levels”.  Also, there were podium discussions during the conference.

Representatives of Zaporizhzhia National University took an active part in the discussion of problems that are relevant not only for our state, but also at the global level. In particular, they noted that ZNU make a lot of efforts to ensure energy efficiency, and they do not remain aloof from solving environmental problems.

Hennadii Vasylchuk, Vice-Rector for scientific work, while speaking about the participation of representatives of HEI in the conference, noted that the university attaches great importance to the practical component of the scientific activities. That is why participation in such international scientific events provides an opportunity to establish new contacts, learn about the possibility of participating in joint projects, and etc.  And also to be aware of important social trends and contribute to the solution of important issues of our time.