The double diploma is a reality for a student of ZNU 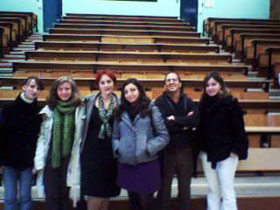 Students of the Faculties of Physics, Mathematics and Biology of ZNU have a chance to study in France during a year and to receive the master’s diploma of the European sample in addition to the Ukrainian one. 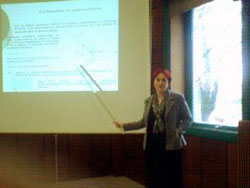 At the beginning of 2007 at Zaporizhzhya National University under the initiative of the Dean of the Faculty of Foreign Philology, senior lecturer Galyny Moroshkinoj, preparation for realization of the program of bilingual study of students (in Ukrainian and French) began. For this purpose on the basis of the center of intensive studying languages of ZNU groups of teachers of, at first, the Faculties of Mathematics and History, and then - the Faculties of Physics and Biology were generated. And in half a year during an educational exhibition of higher educational institutions in Dnipropetrovsk our high school have been suggested to establish direct contacts with a management of the Faculty of Science and Techniques of University du Man.

After several visits of French delegation in ZNU the cooperation agreement was concluded between universities and the program of receiving the double diploma by students was introduced.

The senior lecturer Victoriya Menyajlo, the head of the department of postgraduate study and doctoral studies, marks, that such program creates conditions for teachers’ foreign training and opens before ZNU wider prospects of the international activity, does accessible to us participation in those programs which provide presence of the foreign partner.

Galyna Moroshkina and Victoriya Menyajlo during visiting University du Man at the end of last year had talks about more concrete aspects of cooperation. Ukrainian and French scientists developed and approved the general programs of masters’ preparation on specialties: “Physics” and “Applied physics”. Next year four masters of the Faculty of Physics: Anton Posmetny, Olexandr Stepanenko, Egor Markov, Irina Markova will study on this program at University du Maine:

Also they have agreed about monthly grant (670 euros) to the best Zaporzhye students that becomes for them essential financial support during stay in Le Manet. Besides it during this trip opportunities for expansion of contacts between two universities were discussed.

Victoriya Menyajlo during the visit to the French university gave some open lectures in French for students of physical specialities on the mechanic, thermodynamics, and the quantum physics.

One more, not less important event became adjustment of contacts to the French faculty of modern history. French historians were interested in some themes of researches offered by scientists of ZNU, in particular, “Interaction of Europe and Ukraine in historical aspects” or “the Phenomenon of Ukrainian Cossacks on international arena”. They were estimated as perspective for the next cooperation with the Ukrainian colleagues.

The university du Maine is also interested in cooperation between our high schools. On December, 30th in the French newspaper “Le Maine libre” the article “University du Maine joins Ukraine to the policy of researches in the field of physics and nanomaterials, where French professor Abdeladi Kassyba and representative of ZNU Victoriya Menyajlo told about features of cooperation of our universities.