Recently, a solemn graduation ceremony for junior specialists "Step into a happy future" for students of the College of Economics and Law has been held in Zaporizhzhia Regional Academic Ukrainian Music and Drama Theatre of V. Magara.  On the theater stage, 187 graduates received diplomas that they were awarded by the rector of ZNU Mykola Frolov, college director Olena Hrybanova, as well as representatives of various departments of ZNU, where most university graduates plan to continue their studies on September 1st. 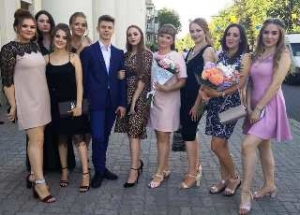 This ceremony takes place on the basis of the theater of V. Magara for 8 years in a row.  It has become a good tradition for the College of Economics and Law. Vocal and choreographic performances of representatives of the theater’s creative team created a special festive atmosphere.

Director of the College of Economics and Law Olena Hrybanova thanked parents of graduates for their trust and cooperation during the training of their children.  She also noted that students of 3 courses of all specialties of this year successfully passed EIE in Ukrainian language and literature.  In addition, 90% of college graduates plan to continue their studies at senior university courses.

Olena Yevhenivna mentioned that the administration of ZNU has always comprehensively supported the development of the college, and provided the floor to the rector of ZNU, Mykola Frolov. Mykola Oleksandrovych congratulated graduates with the completion of an important stage in their lives. Mykola Frolov and Olena Yevhenivna in a solemn ceremony handed diplomas with honors, certificates of honor signed by the rector and director of the College of Economics and Law and silver medals to the best graduates of all specialties.  At the same time, they noted not only significant academic progress, but also the activity of students in the public, sports and cultural life of the college.

At the end of the event, Anna Holub and Vladyslav Solonckyi spoke on behalf of all graduates.

Other students supported their performance with loud applause.  Also, as a token of gratitude, they presented flowers to all professors of the College of Economics and Law.

Representatives of CEL ZNU took part in cerebration of «World Earth Day»
Day of Knowledge in ZNU gathered first-year students of all courses and colleges
Ceremonial presentation of diplomas took place in the Zaporizhzhia Metallurgical College of ZNU
Selection Board of the College of Economics and Law has begun its work
College of Economics and Law announced the results of the All-Ukrainian competition of Ukrainian studies
© 2018 ЗНУ Запорізький національний університет, 69600,
м. Запоріжжя, вул. Жуковського, 66,
Відділ діловодства тел./факс +38 (061) 228-75-08
Приймальна комісія тел. (061) 228-75-38 та (061) 289-12-68
Офіційна пошта