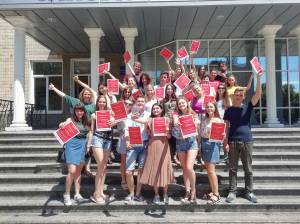 From June 28 to July 7, the “Summer School of Young Journalists” was held on the basis of Zaporizhzhia National University, organized jointly by ZNU, German NGO Interlink Academy and Institute of Sociology of the National Academy of Sciences of Ukraine, and within the framework of the Eastern Partnership program with the support of the Federal Foreign Office of Germany. 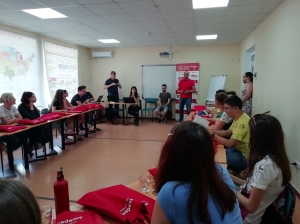 The summer school was opened by the director of Interlink Academy Verner Ehhert, vice-rector for scientific work of ZNU Hennadii Vasylchuk, deputy dean of the faculty of journalism for international affairs Kateryna Sirinok-Dolharova, associate professors of the Department of English Translation Theory and Practice Oleksandra Holovko and Svitlana Zapolskykh. The trainers of the school were journalists Artem Babak, Volodymyr Torbich, Oksana Stavniichuk. The project was also visited by the Deputy Consul of Germany Peter Shmal.

24 participants of the “Summer School of Young Journalists” from Zaporizhzhia and the region, as well as from Dnipropetrovsk, Donetsk, Odesa, Mykolaiv, Zhytomyr, Vinnytstsia regions were selected from more than 80 applications. For 10 days, students deepened the knowledge and skills of public journalism, got acquainted with the specifics of blogging, developed critical thinking, created their own media projects, communicated with experts and visited the public broadcasting company Zaporizhzhia. In addition, during practice, they learned to write materials, create infographics, shoot and edit videos, make high-quality photos and photo reports, and also got acquainted with the possibilities of publishing their materials.  During the course of intensive training, the organizers conducted a number of thematic trainings, interesting meetings, presentations and cultural events. Upon completion of all participants handed the appropriate certificates.