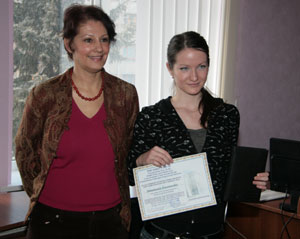 Results of the unique course “Statement of news”, which was taught by Chrystyna Demkovych, the participant of Fulbright academic exchange program, the Professor of Colombia University, were brought on January, 26th. Ten students received official certificates, to which it is possible to refer at drawing up the resume.

It is necessary to note, that for being taken on this course all applicants (more than 50 persons) had to pass rigid enough selection, the main criterion of which was speaking English fluently. And those who were lucky to become Chrystyna Demkovych’s students, had to work much to receive certificates on finishing the course.

During classes students did not only learn how to create news. They received detailed knowledge in journalistic ethics and skill, could draw analogy between the western and Ukrainian journalism. The course contained many original and non-standard tasks. Most of all students remembered the debate during which they did not only analyze the important events of the world, but also did monitoring press on the selected theme. The greatest quantity of points on results of all semester was received by the student of the second course Anastasiya Kuzmenko.

The Dean of the Faculty of Journalism, Professor Volodymyr Manakin congratulated students on finishing the course. He noted, that knowledge, which our students received in Chrystyna Demkovych’s classes is an invaluable experience and great achievement for each of them.

Chrystyna Demkovych noted that she liked Ukrainian students even more, than American.