The best experts on finance and banking were defined in ZNU 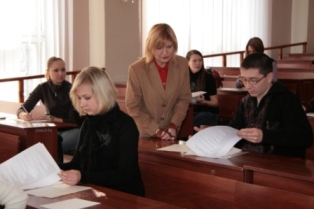 At the Faculty of Economics of Zaporizhzhya National University the first stage of all Ukrainian student's Olympiads in specialities "Finance" and "Banking" was summed up. The best experts in these economic disciplines will represent our university at a nation-wide level.

The organizer of the action was the department of Finance and Credit. All wishing bachelors and masters could check up their knowledge on burning questions of the theory of finance, finance of the enterprises, financial market, financial management, and also to define, how much they are guided in features of modern banking. Among tasks of the Olympiad not only tests were presented, but also practical problems of calculating and situational character.

Among masters the winners of 1 stage of all Ukrainian student's Olympiads in speciality "Finance" became Victoriya Omelchenko and Aksynya Novikova. The second place was taken by Liliya Kyrychenko, Vladyslav Bogdanov and Sergiy Shchus. The third place - Irina Kurylenko.

Among bachelors, by the results of the Olympiad, the best were Anna Rurka and Mychaylo Evtushenko. Olena Romanchenko took the second place. And her groupmate Nina Savina was on the third place.

Svitlana Davydova got the biggest quantity of points among masters who took part in the І stage of all-Ukrainian Olympiad in speciality «Banking». The first place was divided with her by her groupmate Anna Nytsenko. As these students have much more outstripped other participants of the Olympiad, so, under the decision of the jury, the second place have not appropriated to anybody. Olexander Sylaev took the third place. Among bachelors the best result in "Banking" got at Nina Savina. The second place took Mychaylo Evtushenko and Olena Romanchenko. And the third place was divided by Svitlana Severina and Alisa Kapjonkina.