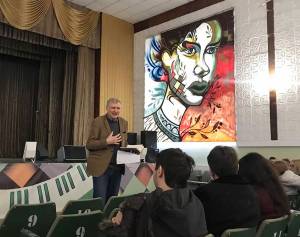 On February 11, an official meeting of the administration, academic and teaching staff with students of the Faculty of Journalism took place in the assembly hall of the 2nd building. Traditionally, such meetings are held every term in order to summarize the functioning of the faculty for a certain period, outline plans and prospects, raise urgent issues and problems.

The first word was taken by the Dean Viktor Kostyuk. He emphasized the present’s attention at the integration of the experience of European universities at the faculty, recalled the basic principles of the educational process, highlighted the importance of a positive atmosphere in the classroom and outside. The dean emphasized that the faculty has high ratings among other quite powerful Ukrainian universities and can compete with even the departments of journalism in the capital. In addition, the Faculty is the part of one of the largest European projects for the restructuring of journalistic education DESTIN Erasmus+ KA2.
Natalia Tyapkina was the second one who came up to the microphone, the deputy dean of the educational unit. She spoke about academic discipline, students’ achievements, listed and pointed out the straight A’s students based on the winter session (51 people), recalled the implementation of the Regulations of the re-study of disciplines. The speaker noted that our university is a progressive educational institution in terms of selective disciplines. At the top universities in the US, Europe, a large number of disciplines are proposed for students to choose. Therefore, the university goes in this direction and asks students to be responsible in this choice. After all, it is necessary for the development and expansion of the worldview. Anastasia Kondryko, the deputy dean for socially educational work, spoke about the vectors of extracurricular activities at the faculty. She especially thanked the curators of the academic groups and the group leaders who ensure the continuous interaction of the students with the dean, as well as the student council activists. She also reminded about the chance to receive a scholarship for gifted youth, participation in the Student of the Year competition and more.
The speech was about the visits to the faculty of well-known journalists, advertisers, PRs, public figures who give lectures and workshops. And participation of such guests in the life of the faculty is extremely important for development a future personality.
The importance of scientific achievements during student years was drawn by the deputy Dean for Science, Victoria Kovpak, and Katerina Syrinok-Dolgaryova, the Deputy Dean for International Cooperation and Project Management, told students about international student exchange programs and courses regularly initiated by foreign students. She also pointed out that inder DESTIN project the faculty conducted complex student survey and presented its results, which were considered while updating BA and MA curricula in Journalism.
After the speeches of the colleagues, the deputy dean for vocational guidance, Anna Baranetska, emphasized the need in developing a positive image of the faculty during practice, professional activity, and personal communication.
Also, under a meeting it was held reporting conference by student council chairwoman Mzia Kharchilava, who spoke about the achievements of her team and presented a short video confirmation: "I have implemented about 15 projects with my team. This is 'What? Where? When?' at the university level, an incredible number of music breaks, "The Secret Friend", "Giveaway", "Winter Challenge", "New Year's Party with Teachers and others".