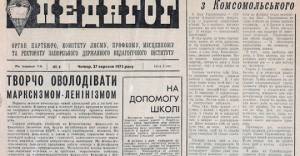 Zaporizhia National University celebrate its 90th anniversary in 2020. At the University, several projects are being successfully realized, which are related to highlighting the key stages in formation and development of a leading institution of higher education in the south of Ukraine.

For 90th anniversary of Zaporizia National University the project of digitalization of the newspaper “A Professor” is being realized (1973-1985) like printed organ of Zaporizhia Pedagogical Institute and important source of historical evidences.

Now, we are proposing to your attention newspaper covers for 1973-1977 years.

Within ZNU commemoration, the Museum of the University is being modernized, a book on the history of the university is being prepared, a digital archive of audiovisual materials is being created. We appeal to teachers and staff, graduates, to share photos, documents, audio, video, personal items related to the history of Zaporizhia Pedagogical Institute and Zaporizhia State University. We are ready to digitize or make copies of your materials, leaving the original to their owners.

If you have any questions or suggestions regarding participation in the collection of materials related to the university's past, please contact the Vice-rector for Science and Education Yurii Kaganov at e-mail: znuhist@gmail.com