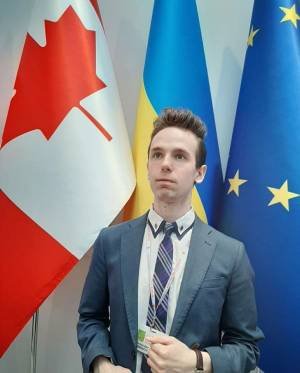 At the beginning of April 2020, the final stage of the All-Ukrainian competition for student scientific works on Ukrainian language and literature (with the method of their teaching) took place at the Faculty of Ukrainian Philology of the Uman State Pedagogical University named after Pavlo Tychyna. The sectoral competition commission for Ukrainian literature provided review of 37 student papers. The commission admitted 11 authors' works as applicants for the award. It is nice to note that among the winners is a student of the Philological Faculty Oleksandr Smyrnov.

ZNU student was awarded with a diploma of the first degree for the work "The author's universe of lyrics by Maryna Bratsylo" (supervisor - candidate of philological sciences, associate professor Valentyna Nikolaienko).

The talented fourth-year student is not the first to fill up the box of awards of the Faculty of Philology. He became the absolute winner of the All-Ukrainian Student Olympiad. Won the IX International Taras Shevchenko Student and Student Youth Literary Competition. Took 3rd place in the Poetry nomination. All-Ukrainian Contest of Young Ukrainian Poetry and the Author's Song of the Name of Maryna Bratsylo "Khortytsia Bells". Also, Oleksandr - winner in the nomination "Student - scholar of the year" in the university stage of the competition "Student of the Year-2019". He also won the 2019 Regional Competition for Gifted Youth in Science.