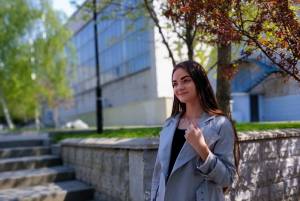 Daria Yurchenko is a student of the 1st year of master’s program of Faculty of Foreign Philology. At the stage of criticizing works in the second round of the All-Ukrainian competition of student scientific works in German Languages (English, German) she has taken the 11th position in the ranking. And on April 16, the winners have been announced. And as a result of which the student received a diploma of 3 degrees.

Daria Yurchenko's scientific work is entitled "Images of Nature in the Artistic Texts of English Writers in the XXth Century." This work was written with the lead of Professor of the Department of English Philology Hanna Prykhodko.

This Competition is traditionally announced at the beginning of each academic year by the corresponding order of the Ministry of Education and Science of Ukraine. This Competition has 2 rounds. The second round of the competition takes place in basic higher education institutions and is conducted in two stages: Stage 1 - criticizing works; Stage 2 - having the final scientific and practical conference.

In the case of the quarantine, the procedure for this year's competition has been slightly changed. The organizers decided not to hold a scientific-practical conference. The determination of winners was based on the results of the criticizing works.