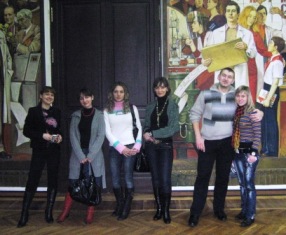 On February 18th in V. Karazin Kharkiv National University there was the regional convention of the representatives of scientific organizations of Ukrainian higher educational establishments. It was organized by the Student Scientific Society of this university and the Ukrainian Association of Student Self-Government. Svitlana Syrytsya, head of ZNU Scientific Society of Students and Graduate Students, participated in the event and presented the University publications Scientist and Graduate Student.