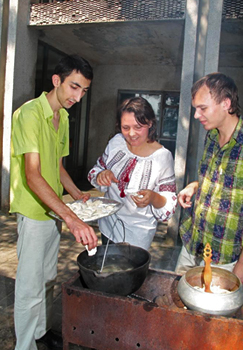 The university guests were attended lectures in Ukrainian Language during three summer weeks. They also learned how to cook varenyky, decorate pysanky, sing and dance Ukrainian songs. The education process was organized at the ZNU preventorium at the Khortitsa Island, where students not only studied, but also had a great rest.

At the beginning of 2010 Zaporizhzhya National university signed the contract which allowed ZNU to join the international project TEMPUS. Five Baku Slavic University students became the first participants of this program.